Paleolithic art would be unthinkable without the mastery of articulate language and tools of Homo Sapiens. In the long race of human evolution, the body changes form through a series of steps of emancipation of functions. The standing position made the hand available for new tasks and the hand releases in turn the mouth from food harvesting, thus giving rise to anatomical changes that enabled the Sapiens to pronounce complex sounds. In bipedal walking, the body is kept in equilibrium by an enlargement of the cranium (the opening of the "cortical fan") which allows for an increase of the median part of the brain and consequently specialization of the neuro-motor system. This is the beginning of the dialogue between voice and hand. The hand gesture turns a piece of wood into a tool by including it in a series of technical operations as well as in a network of exchange and collaborative relationships. Similarly, a sound becomes a word when it is inserted into a system of shared meanings. 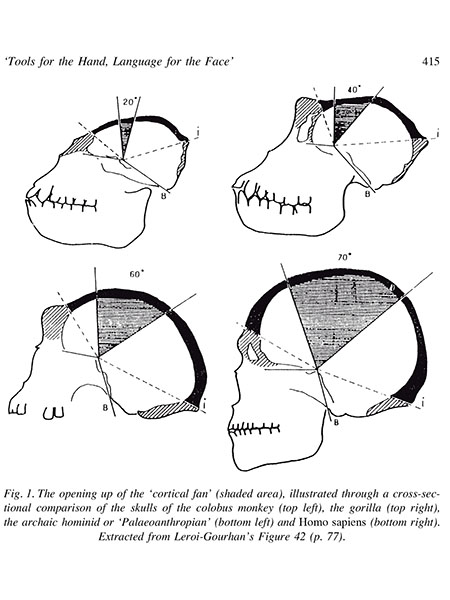 The opening of the “cortical fan” (grey shaded area) illustrated through the comparison between the craniums of a macaque (top left), a gorilla (top right), a hominid (bottom left), and the Homo Sapiens (bottom right).