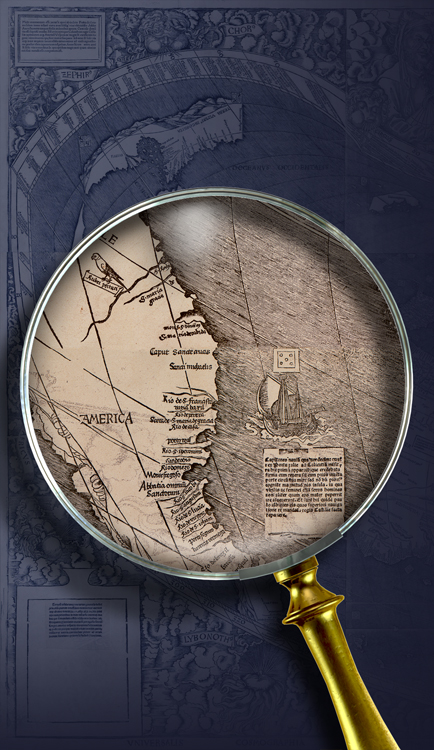 [Sailing along the coast of the new land] we noticed the difference of the night growing longer and the day diminishing. In truth when we were at the latitude of fifty degrees, we were at sea and not on land, because when we managed to push off from land, we were not at [a] latitude greater than thirty-two degrees, and then we sailed to the southeast until we arrived at the said latitude of fifty degrees without finding land, although we judged that we were near land by many visible signs, among them countless birds of various sorts and much wood in the water: most certain signs. But because the sea was very turbulent and cold, the vessels suffered much wear and the men were very weakened from having been sixteen months at sea with shortage of provisions, and for many other reasons, we resolved not to go on our explorations but rather to turn back toward Portugal. And at the point where we arrived and where we turned around, we were almost sixteen hundred leagues to the south on a straight line from the city of Lisbon; for, if you set up the proportion, calculating the circumference of the earth to be twenty-four thousand miles, you will find that we had sailed about ninety-two degrees south of the city of Lisbon, which, as you can see, is more than one quarter of the terrestrial world.

As for a defense of my claim that the people in that land go about naked, this is supported by natural reason and the fact that I saw so many "that no one can enumerate them." There is no merit to the argument that since you are located in the sixth climate or at the end of the fifth, how can those in the seventh who go about naked better endure the cold than we who go about in two layers of clothing? For, as the Philosopher says, "customs transform nature." And surely in all my three voyages over the earth—two of which I made to the west by the Ocean Sea, following both courses of south and southwest, while on the third I took a course to the south by the Atlantic Sea—I have seen during those voyages nearly two thousand leagues of continental coast and more than five thousand islands, and many of those inhabited, and the mainland full of countless peoples, and never did I see any of them clothed, nor did they even cover more or less of their shame, men or women.