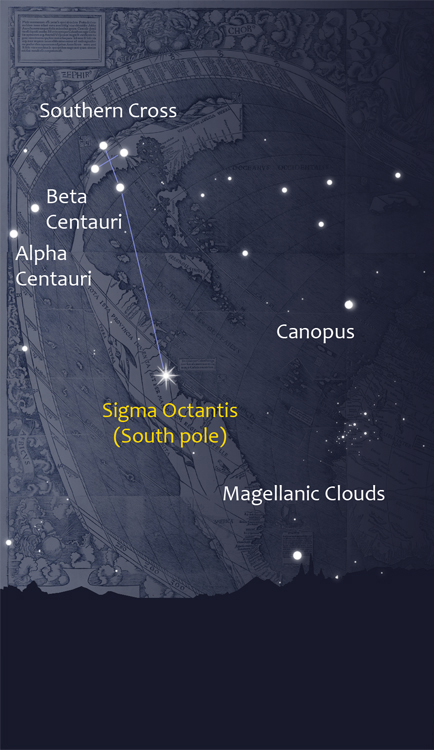 I tell you that we sailed so far south that we entered the Torrid Zone, and went within the Tropic of Cancer. You can be sure that within a few days of sailing through the Torrid Zone, we sighted four shadows of the sun, and when the sun appeared to us and its midday zenith—that is, the sun being in our meridian—we had no shadow at all: many times I pointed this out to the entire company, so that they could bear witness to this fact for the sake of the common people, who are ignorant of how the solar sphere moves through its zodiacal circle; for I once saw the shadow to the south, and another time to the north, and yet another time to the west, and another to the east, and sometimes for an hour or two in the course of the day we had no shadow.

And we sailed so far south through the Torrid Zone that we found ourselves beneath the equator, with both the poles at the edge of the horizon, and we moved six degrees beyond it, and completely lost sight of the North Star, and the very stars of Ursa Minor, or more precisely, the Guards which revolve around this firmament were scarcely to be seen.

And as I longed to be the author who would designate the other polar star of the firmament, I lost the sleep of many a night contemplating the movement of the stars of the other pole, in order to determine which of them moved less, and was nearest the firmament: and yet I could not, for all the bad nights I had, and the many instruments I used—among them quadrant and astrolabe—mark a star that moved less than ten degrees around the firmament; so that I remained unsatisfied within myself at designating any the South Pole, because of the great circle they made around the firmament.

And while pursuing this, I recalled a passage from our poet Dante from the first canto of Purgatorio, when he imagines he is leaving the hemisphere in journeying to the other. Wishing to describe the South Pole, he says:

Then I turned to the right, setting my mind

upon the other pole, and saw four stars

not seen before except by the first people.

Heaven appeared to revel in their flames:

o northern hemisphere, because you were

denied that sight, you are a widower!

It seems to me that in these verses the Poet seeks to describe by the "four stars" the pole of the other firmament, and even now I have no doubt that what he says is true: for I noted four stars forming the figure of an almond, and moving little: and should God grant me life and health, I hope to return to that hemisphere soon, not leaving it until I have observed the pole.

I would say, in conclusion, that we sailed so far south that our course reached 60½ degrees from the latitude of the city of Cadiz, because above that city the pole rises 35½ degrees, and we went six degrees below the equator. Let this suffice concerning latitude.

Yet you must note that we were sailing in the months of July, August, and September, when, as you know, the sun reigns longest in our own hemisphere, describing a larger arc by day and a smaller one by night: while we were at the equator, or within four to six degrees of it—which was during July and August—the difference between day and night was imperceptible, day and night being almost equally long, or in any case scarcely different.