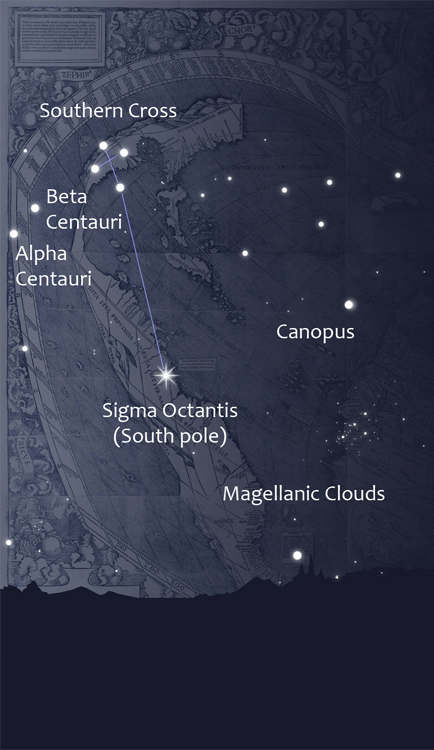 We travelled so far upon these seas that we entered the Torrid Zone and passed south of the equator and the Tropic of Capricorn, so that the South Pole stood fifty degrees above my horizon; and my latitude from the equator was the same, for we sailed nine months and twenty-seven days without seeing either the Arctic Pole or Ursa Major or Minor, and conversely to the south the sight was revealed to me of countless very bright and beautiful stars, which always remain hidden in the north. There I observed the wondrous workings of their movements and their magnitudes, measuring the diameter of their orbits and notating them with geometrical figures; and many other movements of the heavens I noted down, which it would be prolix to describe: but the most remarkable of all the things I beheld on this voyage I have gathered into a small work so that, when I shall have the leisure, I may occupy myself with the task, that I may gain some fame after my death. I was intending to send you a summary of it, but this His Most Serene Highness has taken; but when he returns it to me, I shall send it.

In conclusion, I was in the region of the Antipodes, on a voyage which covered a quarter of the world: the highest point of my zenith in those regions made a spherical right angle with the inhabitants of the northern hemisphere, who are a latitude of forty degrees; and let that suffice.

Sky and air are clear for most of the year and free from dense vapors. The rains there fall delicately and last three or four hours, then vanish like mist. The sky is adorned with very beautiful signs and figures, in which I noticed twenty stars as bright as we sometimes see Venus or Jupiter. I considered their movements and orbits and measured their circumferences and diameters with geometric methods, and determined that they are of great magnitude. I saw three Canopi in that sky, two of which are bright indeed, and the third dim. The Antarctic Pole has no Ursa Major and Ursa Minor, as appear in our Arctic Pole, nor is any bright star seen near it; of the stars which are carried around it on a smaller orbit, there are three which form the figure of an orthogonal triangle, of which half the circumference, or the diameter, is 9½ degrees.

As they rise, a white Canopus of extraordinary size can be seen to the left. When they reach mid-heaven they form this figure:

After these come two other stars, of which half the circumference, or diameter, is 12½ degrees, and with them can be seen another white Canopus. Another six stars, the brightest and most beautiful of all in the eighth sphere, follow them; on the surface of the firmament, these stars have a half-circumference, or diameter, of thirty-two degrees. A black Canopus of immense size soars up with them. They are seen in the Milky Way and form a figure like this when they are on the meridian line: