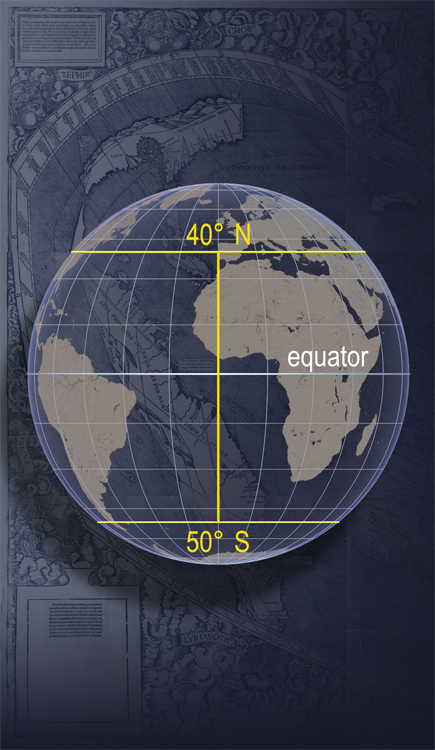 As for what you say regarding the end of the first chapter of my letter, where I stated that the intersection of two lines, that is the line of my zenith and that of my parallel, made a spherical right angle for me, what I said and still say holds true; but you misunderstood the chapter; for, if you draw a perpendicular line from my zenith and another from the parallel of the city of Lisbon, which lies forty degrees from the equator, you will clearly see that [...] a part of the world or the [...] orbit; reasoning which is ill-suited to demonstrate the degrees of latitude I traversed.

A bit earlier I spoke of the hemisphere, although, properly speaking, it is not fully a hemisphere with respect to ours; but since it approaches the shape of one, it is permissible to call it so.

Therefore, as I said, from Lisbon, our point of departure, 39½ degrees from the equator, we sailed fifty degrees beyond the equator, which together make about ninety degrees, and since this sum makes a quarter of the great circle, according to the true reasoning of measurement passed on to us by the ancients, it is clear that we sailed around a quarter of the world. And by this logic, we who live in Lisbon, 39½ degrees this side of the equator in the northern latitude, are at an angle of five degrees in the transverse line to those who live at the fiftieth degree beyond the same line in the southern latitude, or, so that you may understand more clearly: a perpendicular line, which hangs over our heads from a point directly above us when we stand upright, hangs pointing toward their sides or ribs: thus we are in an upright line, and they in a transverse line, and a kind of orthogonal triangle is formed thereby, of which we form the perpendicular line, they the base, and the hypotenuse extends from our vertex to theirs, as is evident in the drawing

And let these words suffice for cosmography.